Located at 1201 Battleground Avenue, the office is part of Greensboro’s northwest section of downtown referred as “Midtown,” giving a sense of community and unique identity.

Throughout Midtown, artists have painted massive murals on multiple buildings. An image of a Native American is one side of the building where the Carter Bank & Trust new office is located. 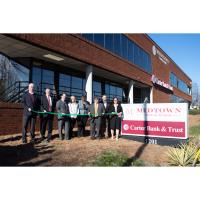